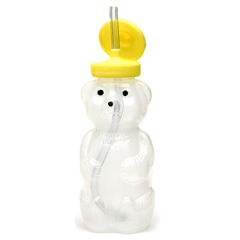 Just when Winnie the Pooh came to dominate the hearts of children everywhere in the world, bears were transformed from an intimidating predatory creature to cuddly toy animals that became an overnight sensation. Honey Bear W/ Flex Straw combines the mainstream trend of water bottles in the shape of animals with the Oral Placement Therapeutic tools so that you can trick your child into the proper way of drinking by training them from cup drinking to bottle feeding in a fun way, which would definitely appeal to their visual and tactile sensations!

These days the market is filled with sippers that come look attractive while online shopping but in reality consist of gaudy shades, which don’t go with the aesthetic appeal of your child’s nursery. Honey Bear W/ Flex Straw ensures that the colours blend in subtly with the background of your rooms no matter what your taste is. With a bear’s body in pristine white and the top in the shade of lime yellow, the product has been the favourite of the uber cool kids on the block who love to make a fashion statement even in their toddler years. The most unique feature of Honey Bear W/ Flex Straw is that the top flap in yellow will give your child into thinking that it is a cute hat on a teddy bear toy which when clicked open will double up as a water bottle. Utility meets beauty in Honey Bear W/ Flex Straw.

Children are at their most inquisitive and vulnerable state when they are toddlers. You might have often seen your kid poking into their food or pulling open the drawers to behold the miracle of what lies underneath. The transparent body of Honey Bear W/ Flex Straw ensures that they can see the water they suck in through the straw gradually travelling upward so that they can be momentarily delighted. They would surely look back upon their Honey Bear W/ Flex Straw lovingly as the impetus, which propelled them into a career in science by unfolding to them the mysteries of physics while those with artistic instincts would feel inspired by the quirky design to come up with creations of their own! The grooves on the body not only give the startling impression of an actual bear but also would provide a better grip so that it doesn’t slip out of your kid’s hold and harm their gums in any way.

No compromise on quality

Honey Bear W/ Flex Straw not only helps in lingual grating and tongue retraction but also is preferable for all those oral grating movements, which are necessary for feeding and development of speech capabilities. If your child is someone who has forward tongue thrust and doesn’t know how to drink from a straw, Honey Bear W/ Flex Straw, a water bottle which uses a sucking mechanism to create vacuum and draw out water and paves the path for your child to drink water independently in his later years.

Be prepared to be crowned “Parent of the Year” with Honey Bear W/ Flex Straw!