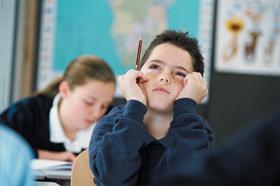 Five Signs that your Child may have an Attention Disorder

Health issues are a big problem these days, especially health problems in children are on the rise. Child related medical problems not only have a negative impact on the child but the parents suffer equally. It is said that prevention is better than cure and truly if the problems are diagnosed earlier then a total recovery is possible. Attention disorders can be seen in children as well as adolescents; boys are more prone to Attention Deficit Disorder (ADD) or Attention Deficit Hyperactivity Disorder (ADHD). There are several ways to check if your kid is facing such disorders so here are few signs and symptoms that can save you a lot of time.Here you can know about the five signs of attention disorder in children. Being careless One obvious sign is seeing your child being careless at times. But this may be often confused with normal carelessness attitude that small kids are often prone to. You can distinguish it yourself but you have to observe carefully and make a note every time he is careless. After couple of days you can figure it out. A normal child won’t be careless in repetitive activities once they have been warned but kids with attention disorders will be inattentive and careless when the same activities are repeated again and again. Difficulty in organizing stuffs A common way to know if your child is having some kind of attention disorders. After a certain age children become organized, they keep their stuffs together and they learn to manage small things. These are common among normal children but this is a burden for a child with attention problems. They cannot coordinate on their own and often require guidance. They find it difficult to complete their projects on time and plan things ahead. Problems related to memory It has been proved by scientists that children have better memory than adults. And as a result they can store much more information. But kids facing ADD/ADHD have tough time remembering things. Memorizing boring stuffs from text books is rather an unmanageable task for them. They are not good with instructions so it is better unless they are written somewhere. Prolonged restless This is a symptom of hyperactivity which is again an attention disorder. Restlessness is very common in small children but that doesn’t mean they have attention disorders. Children with actual problems are always restless. They constantly move from one place to another. They fail to obey orders and maintain silence. They can be identified with their attitude which is not at all purposeful instead it is their brain functioning in a different manner. Impulsive behavior Kids with attention related issues tend to react without thinking. Their behavior or their response is impulsive. They say or do whatever comes in their mind at that instance. This is accompanied with emotional outbursts. Attention disorders are completely brain related and it can be awfully frustrating. Diagnosis at an early stage can reduce the symptoms. So it is absolutely necessary to make sure if there is any problem at the grassroots level because the consequences can be harsh later on.