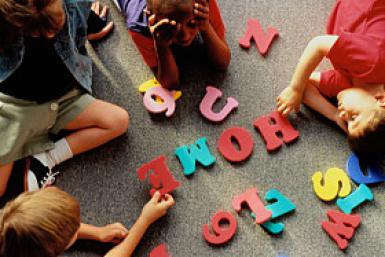 Raised Alphabets: Because Learning Can Be Fun

Raised letters and alphabets have come to be one of the most impactful and sure shot ways of introducing pre-schoolers as well as children with visual impairments, to the world of numbers and alphabets.

However, now that more and more people are turning towards digital teaching of their children, the false notion remains that such raised alphabets, or “braille” as it is often termed, is only for the visually impaired. But this is a completely wrong notion.  Tactile reading, according to doctors and scientists, is one of the most advanced levels of learning that can enhance the neurological capacity of the brain.

Touching is the primary, rawest of human actions used to communicate compassion and love. Researches all over the world have shown the incredible spectrum of physical and emotional benefits that come from the action of touching. So, it is only natural that you would want to engage your children in tactile learning for their mental as well as physical well being.

What are the benefits of learning with raised alphabets?

Clinical studies conducted on groups of children of varying ages, have shown some really promising benefits, such as:

Who can use raised alphabets?

Raised alphabets, though typically used by visually impaired children, can be used by anyone and everyone. Child psychologists encourage parents to introduce this form of interactive learning to their toddlers and little ones in kindergarten, mostly because it improves focus and is extremely engaging and attention grabbing. Children suffering from short attention span, hyperactive children have also, over the years, obtained some serious benefits from using raised letter sheets.

How to implement this in the future?

Raised alphabet sheets can be used in classes by the teachers as well as in the house, during play hours, by the parents. In the future, to maintain the level of improvement and increase the learning capacity already heightened by raised alphabets, one can introduce their child to tactile kinesthetic learning, that is, making them learn their lessons by engaging more than one of the senses. This means an all around development of the central nervous system, better cognitive reception as well as better communication skills.